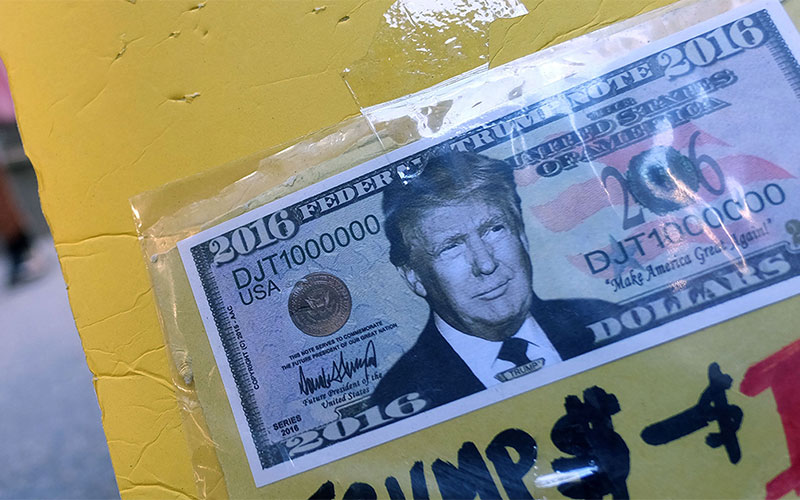 So here we getting down to the wire and it appears that Donald Trump has a chance to get elected. He’s currently 6 points behind in the national scientific polls. It’s not great but any there is a debate on Sunday and again in Las Vegas.  So any slip up by Hillary Clinton could launch the vulgarian back into the race for 270 electoral votes and a seat at the POTUS chair.

So what does that mean to you and me?  Well besides watching the US devolve into a race war where the KKK wing of the new GOP will be given top posts in a Trump  “nationalist” government, there will be ways to profit from the misery! So let’s get into it and take an irreverent look at all the profit possibilities……..

TRUMP POLICY ISSUE:   Build a wall’ — and make Mexico pay for it

Trump announced his candidacy with the promise “to build a great, great wall on our southern border” and “have Mexico pay for that wall,” and has repeated the call with conviction and consistency. But even his supporters have expressed skepticism that this centerpiece promise will see the light of day. An actual wall will be extremely costly, and it remains to be seen how Trump would force Mexico to pay for it.

OK so Trump flies down to Mexico and Mexican President Peña Nieto tells him Mexico won’t pay for it! And so Trump flies back to Phoenix and says he will confiscate all wire transfers to Mexico from undocumented workers and that will pay for the wall. Hum? How stupid does he think workers are? You think they will risk sending wires only for Trump to keep the money? No, of course not! They will find other ways to send their $ 2 per hour back to mamma and papi. Boom! Here’s comes BitCoin!

So start buying BitCoin folks because it’s value works on supply and demand. There is a finite number of BitCoin in the market place and as demand rises, the value rises. Buy now! Today Bitcoin is at $ 611.00 up from $ 239 just one year ago!

TRUMP POLICY ISSUE: ‘Full repeal of Obamacare’ and replace it with a market-based alternative

Trump’s call to repeal Obamacare and replace it with a marketplace alternative is popular among rank-and-file Republicans. Larger majorities in Congress would be needed for repeal.

“If a Trump win is accompanied by Republican control of both houses of Congress, then some significant rollback is feasible and likely,” said John McDonough, a health policy professor at Harvard University.

But in reality, we all know that the winners will be corporate insurance companies as usual! Period!   So just invest their stocks and watch profits go through the roof whilst your fellow broke Americans who have been devastated by his tax cuts to the rich who gladly invested their “trickle down” profits all over the world instead of the USA go belly up, broke, and without healthcare dying in on the mean streets without dignity.  Who cares! Make money!

So Trump said he plans to deport all illegal aliens; that’s 15 million people right?  So how is he actually going to get them all back to Mexico? Well, he’ll have to bus them!

Translation? Buy the bus stocks cause you know the government is going to pay over top dollar for them and mortgage them up on phony national debt list.

Although there are many manufacturers of buses in the world, the fact that any buses purchased at least in part with federal government money have to be manufactured in the United States has meant that for American transit agencies there are a limited amount of manufacturers to choose from.

The three largest suppliers of buses to the American transit market are New Flyer of Winnipeg, Canada (just opened up plant in USA to qualify); Gillig of Hayward, CA; and North American Bus Industries (NABI) of Alabama.

Also, we need to mention that Police State Uniform Manufacturers will be raking in the Trump bucks!

In line with Trumps Deportation Force directives, we will need hundreds of thousands of police state soldiers – opps, I mean officers – to seek and find the elusive $ 3 per hour workers who are to blame for Trumps’ “America Sucks” sales pitch.

Of course, Trump cannot mention his wall street buddies who ripped off every American taxpayer in the trillions via bailouts and lost equities as their personal home equities were wiped out by Big Short traders who knowingly crashed the economy in 2008 making trillions for their fellow criminals.  All this while Americans went completely broke and lost jobs at companies that were forced to cut back or go belly up.

But facts notwithstanding, lets’ roll with Blame Game Trump and put it on the guy that breaks his back 15 hours per day to pick tomatoes.  Yeah, lets go after the guy that pays taxes using others social security numbers because he cannot obtain one due to greedy Employers that make bank off paying less than minimum wages of course never seeing that tax money paid out again.  Sure, why not?  Blame the guy that can’t understand the system or even speak the language while TRUMP goes for 18 years without paying any taxes!  Brilliant!

And so, yes, lets make money off the misery of the under classes!  Yippee!  Once again! Can I hear a “Hey Oh!”

So staying focused on Trumps blaming of the working man for stealing jobs from Americans, Herr Trump is going to need hundreds of thousands of goose-steeping boots and jackets to cloth his force for good. And that means, someone is going to make bookoo bucks!  The winner? Intapol!

INTAPOL Industries is a diversified manufacturer and distributor of uniforms, apparel, footwear and accessories for police & security, federal/military agencies, transportation, industrial and hospitality clients.  They serve markets with over 10,000 high-quality products which include our own INTAPOL branded uniforms and equipment as well as products from over 100 other reputable manufacturers.

From humble beginnings over 53 years ago, they operate today out of a 25,000 square foot facility which houses their warehouse and corporate offices in Jersey City, N.J.

Their in-stock inventory and onsite alteration and customization department enables them the capacity to outfit over 50,000 uniformed personnel per year with shipments to all 50 states throughout the U.S. and over 40 countries worldwide.   In addition, their on-site retail outlet provides the tri-state area with immediate service and local pick up.

Now they are a private company so you cannot buy their stock. But you know their CEO is a Trump voter right? So at the very least, maybe you can buy stock in a local Trump controlled construction company where the CEO lives because you know he will be building a super mansion with 50 rooms and gold toilets by this time next year under President Trump.

* Warning: Trump has affection for manufacturing overseas. So he may try to hoodwink Congress and get them to buy from his people in China, Russia, or Mexico where he clearly manufactures his current mix of products. If so, don’t’ follow my advice above.  Instead, move to Chi-Nah!  Why?  Because they will be making bank off the Trump presidency.

Winner:  Uniform Manufacturers
The Play:   Trump Construction (get a job there)

In a New York Times interview in March 2016, Trump indicated that Japan and South Korea might need to obtain their own nuclear arsenal to protect themselves from North Korea and China if the U.S. is unable to defend them. “It’s a position that we have to talk about,” he said.

That means more nuclear production around the world! Yippee! A nuke race to the bottom of mutual global annihilation.  Can we all say DEFCON 5!

But alas, there will be winners in this sad race to hell.  I mean, winning may not last long as once the shots are fired we’re all gonners!  But in the meantime, we can get super rich investing in plutonium manufacturers and buy ourselves a lovely mansion on beach in Mexico!  Yes, we can watch sipping Margaritas and chasing Señoritas while the whole world burns to hell.  Why not?

There are many nuke material manufacturers around the world but since Trump loves Putin and Russia Oligarchs so much, I say we go full Russian on nuke profits.  So yeah, let’s go with TVEL. TVEL’s activities include development, fabrication and sales (including export sales) of nuclear fuel. TVEL, a subsidiary of Rosatom, consists of 14 enterprises, including mining enterprises, major production entities and supporting infrastructure companies.

Under Trump’s proposed tax reforms, everyone would indeed get a cut. (The top 0.1 percent would receive more tax relief than the bottom 60 percent of taxpayers combined.)

Trump’s plan would bloat the federal deficit by at least $10 trillion over the next decade, even if you factor in economic growth. This makes his promise of protecting Social Security harder to keep, given the program is one of the biggest line items in the budget.

This trickle down idea worked in the past when the world was NOT so globalized but today? LOL!  Are you joking?  The super rich who will be made richer by Trump will always invest their money around the world where it gets the best returns!  Period!  Plain and simple! D’uh!

So for me, I say invest in mansions on the Mexican Caribbean coast. The Riviera Maya is a super hot spot. In fact many in U.S. Government and corporate leaders around the world already have homes down there on the pristine white sandy beaches. Yeah, they live the good life while demonizing Mexico to scare average Americans into pathetic submission.  It’s so lovely!

So there you have it.  Now you know how to profit from the misery coming to the USA!   Do you have any better ideas?  I would like to hear about it so post your comments below.  Oh, next up?  How to profit from President Hillary!  Stay tuned!

About Johnny Punish:  Former punk rock lead singer from 90s underground band Twisted Nixon (1996-2002) Johnny Punish is now pushing his artistic boundaries into the 21st century creating diverse music that matters.  In addition, he’s also engaging around the world as a global social justice political activist, eco-activist, socially responsible businessman, and syndicated writer.  Since 2000, Punish has produced his own music from his home studio using the latest technologies that allow for expansion of ideas and new directions exploring the tough themes that pop artists have to run from.

To share his music, Punish has created the record trilogy “The Strange Story of Johnny Punish, Volumes 1,2, and 3″; a collection of his solo music from 2000-2016.  His music is available on on Itunes, Amazon.com, bandcamp.com and all digital platforms.  As a cyber journalist and activist, Punish has penned over 300 articles on freedom, liberty, and justice around the world writing opt-eds for VeteransToday.com and other truth telling web sites.