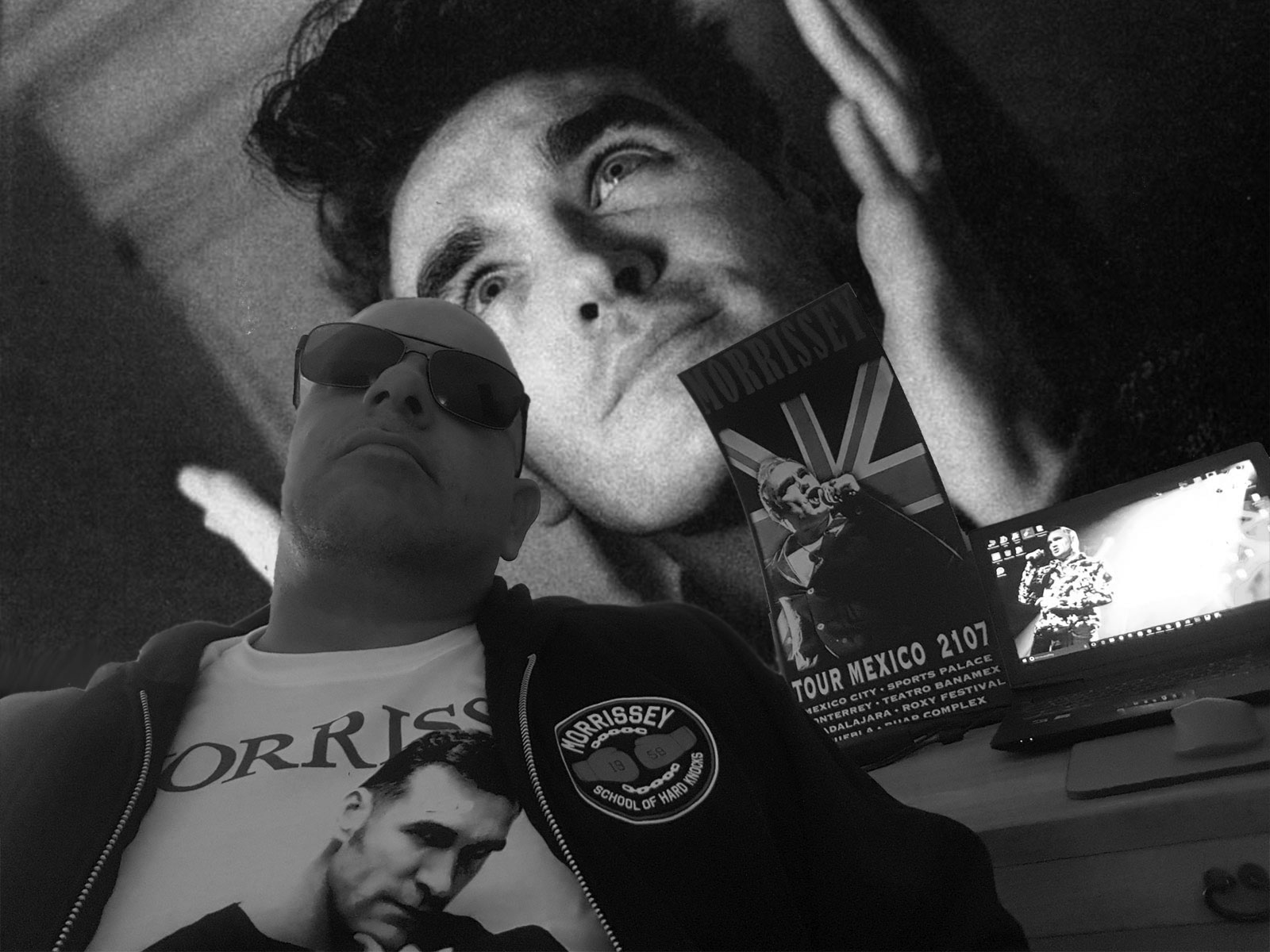 Last night at 7200 feet above sea level in cool air of Puebla Mexico there was a light that will never go out.  Finally, it was him!  Morrissey!

Steven Patrick Morrissey was abfab fantastic.  As always, his big 57 year old heart on his sleeve as he spoke to the people issuing decrees to be good, nice and polite greeting with a big “Hola” (Spanish for “Hello”)  He shared his very best Morrissey with the super happy and enthusiastic crowd of about 2500.

To get in the mood before he came out, the crowd was treated with old skool obscure videos of The Ramones, The Sex Pistols singing God Save The Queen, a young Diane Warwick, James Brown getting down, Marlene Dietrich singing Where Have All The Flowers Gone and others.  It was very diverse, obscure, interesting and very very Morrissey.

He opened with How Soon Is Now (The Smiths) and got the crowd going.

But suddenly, about a third of the way in, he simply politely asked security to step out of the way and let the people come to him.  Yes, he called his flock to the floor to hear him, to touch him, and absorb his sermon on the mount of the Auditorio Metropolitano. 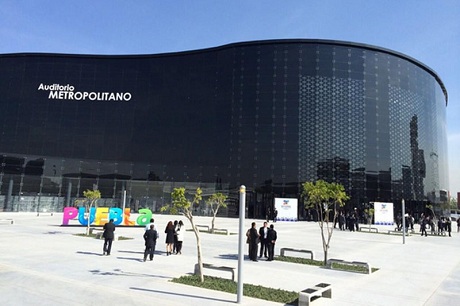 Lovely MOZ followers were jumping over the seats to get to the floor area.  Everyone was gracious, cool, and civil.  They just wanted to get as close as possible to share with their hero.  Every song was greeted with grateful love from the audience.  People were crying, laughing, and feeling his presence.

Morrissey was gracious and in the moment the whole time.  He was with his people in his element and at the altar giving life to those who came for redemption, music, and a general intent to say thank you to one of the greatest lyricists of our time.

But of course, that’s not all.  Morrissey had to go even deeper.

He gave the audience his sermon to stop bullfighting in Mexico.  He called it outrageous and a tradition, like murder that must end.  The band were all wearing the “Stop Bullying The Bulls” t-shirts. He then busted out with his anthem-esque song The Bull Fighter Dies from his latest record World Peace Is None of Your Business.

Later in the set Morrissey delivered his condemnation of the Trump USA with a backdrop of an image of Morrissey holding a baby diapered Trump.  It was hardcore! 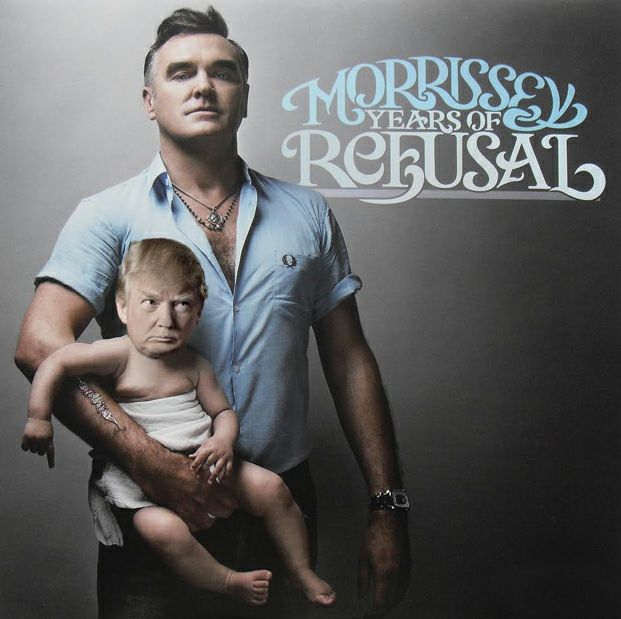 He said it used to be that to defend the USA one would join the military but now one has to go against the president to defend the country.  Then he broke out with an amazing version of Shop Lifters Of The World Unite.

Strange thing….I was listening closely and he later adjusted the vocal saying “Shapeshifters” in place of “Shop Lifters”.

The urban dictionary defines “ShapeShifters” as “Someone who morphs their life to match the person they happen to be dating, i.e. adopt the same taste in music, movies, fashions, foods, mannerisms, etc.” so not sure what that was about.  But then again, Morrissey is always a true mystery.  He does not dumb down for anyone.  It’s up to the fan to figure it out and this fan is still working that out.

But in true Morrissey fashion, this was only the big set up for the strike into our psyche!

He hit the lovely cult members full force with his brutally bold outrageous art performance.  Lights turned red like blood.  The videos of animal murders went up and Morrissey went in deep; fully fearless with no hesitation to rail at us that “Meat Is Murder!” knowing damn well that the Mexican culture puts cow meat at the very top of its consumption; it’s the basis of the taco!

I could feel the audience get a bit tranquilo.  They wanted desperately to join him on this cause but the conflict was raging.  For outside the temple and away from the altar, they are bombarded with meat!  Meat everywhere in Mexico; every corner!  How could he do this to them.  He knows they are going to be conflicted. But that’s Morrissey; too fucking bad!  Deal with it cause “Meat is Murder and we are too selfish!”

It was a loving brutal assault on the psyche of the musical worshipers.  But it had to be!

As Meat is Murder ended the audience clapped but in a more reserved respectful manner.  It was just so overwhelmingly. Shocking!  They had to endure watching Morrissey play videos of animals being murdered in cold calculated callous and disgusting ways.  It was tough love at its finest.  Fearlessly he delivered the message to the flock!

Afterwards, to help us get through it, the keyboardist Mansour played a nice long slow piano intro into the next song giving the audience time to recover from the assault and brutalization of the mind and body.  It also gave Morrissey time to catch his breath before closing hard.

And close he did, kicking it up with Every Day is Like Sunday, You Have Killed Me, Jack The Ripper and then coming out to encore with Judy Is A Punk; a cover from The Ramones) letting us know that he loves us but that he must go now.

Morrissey;  a true fearless artist with heart, empathy and honesty in every sense, every word, and every breath.  And now Morrissey has disappeared back into the dark night, back into our YouTube screens where he shall live forever!  It was a truly great night in Puebla Mexico indeed.

Thank You Steven Patrick Morrissey
Signed, a fan in the 11th row 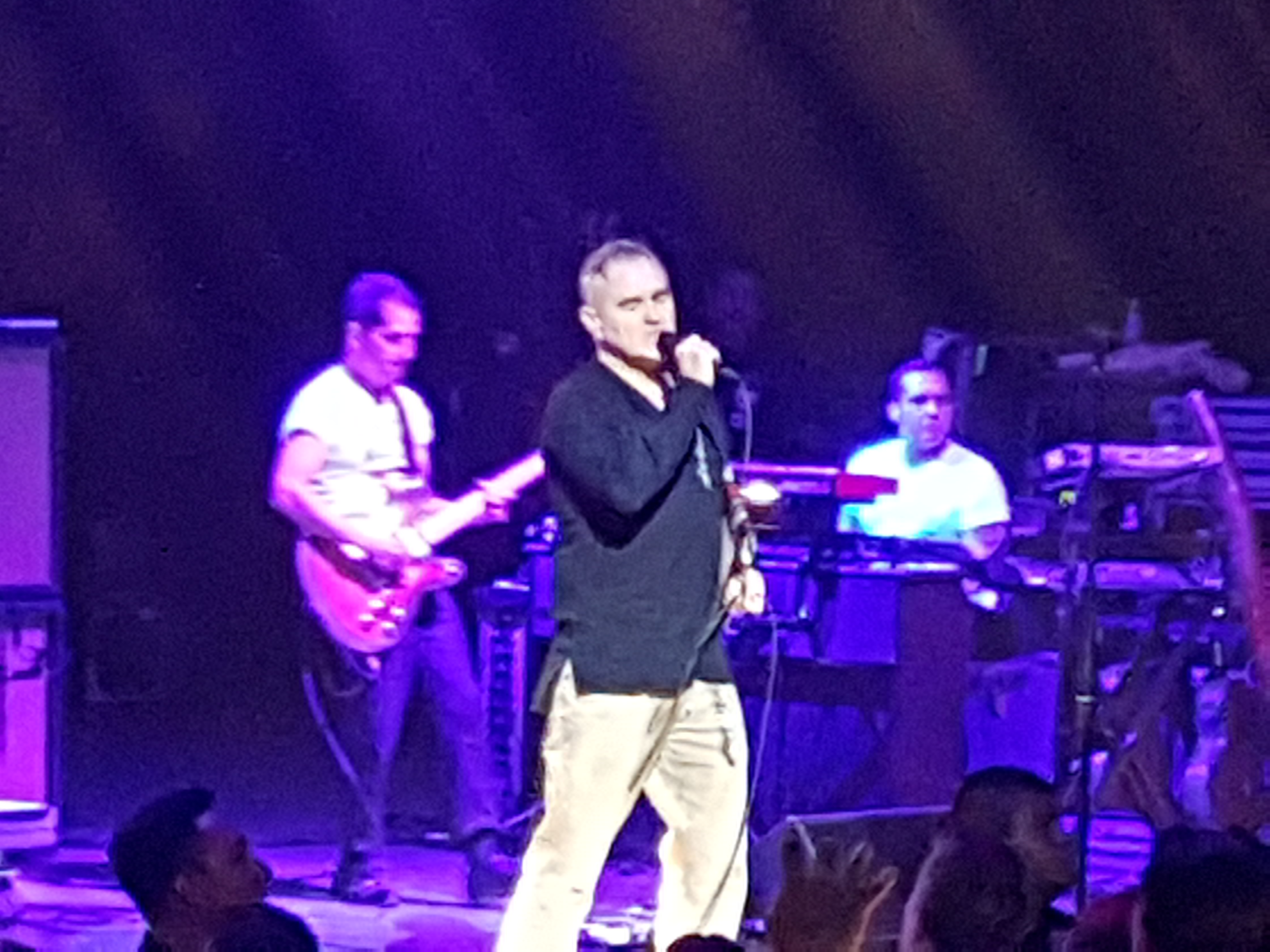