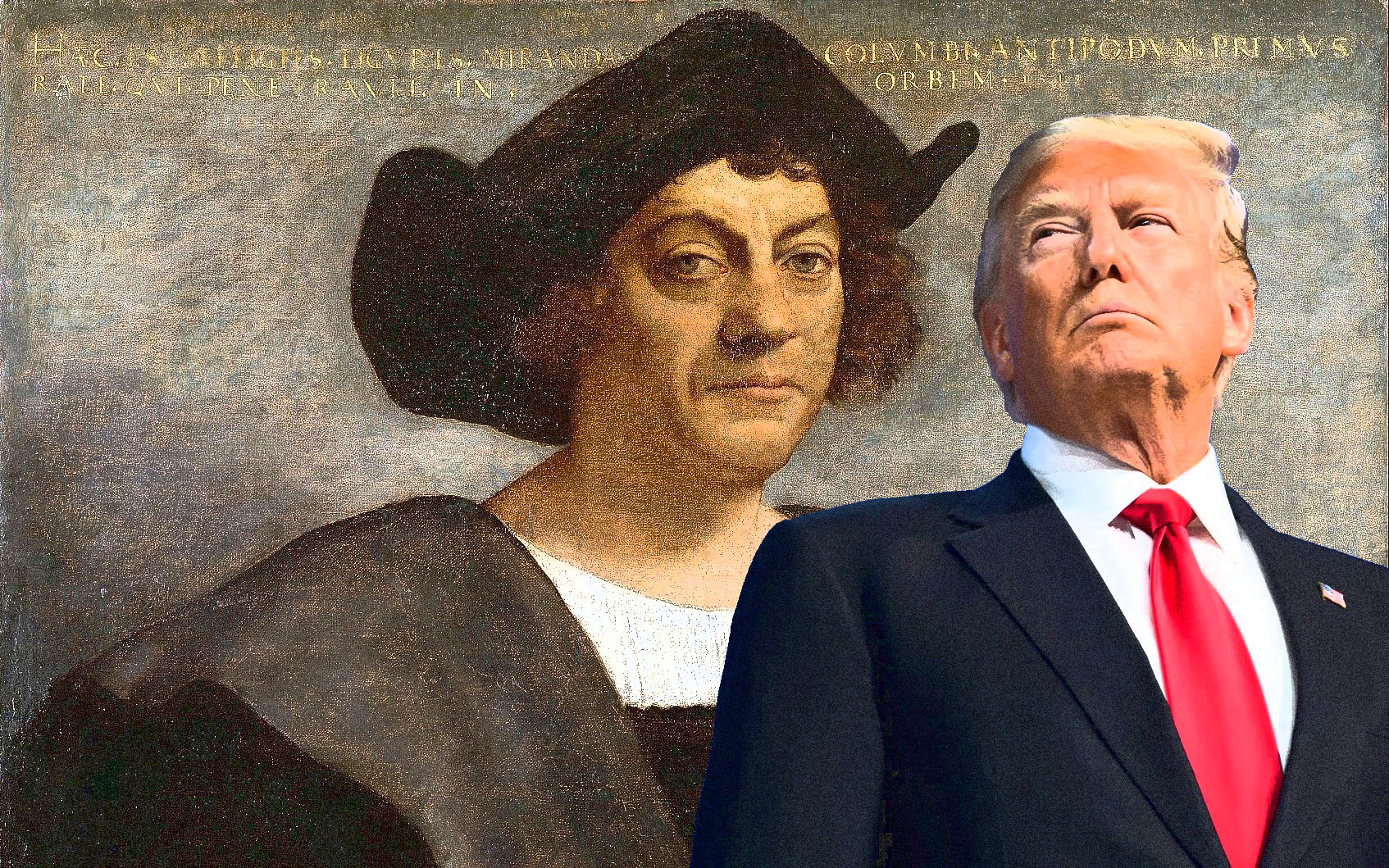 Happy Columbus Day America!  Are you celebrating yet?  Do you think Columbus is a great man or a mythological creation of history to support conquest?

I mean, if Columbus was alive today, would he be a Trump Supporter? I say let’s take a serious real historic look at the man and NOT the myth.  And then we can decide if he would be a Trumpster.

First, Christopher Columbus never landed in the USA. That’s right, he never stepped foot on the land we know as the USA.

He actually likely landed in what is now known as the Bahamas. He called it San Salvador (meaning “Holy Savior”); the natives called it Guanahani.

The explorer Christopher Columbus made four trips across the Atlantic Ocean from Spain: in 1492, 1493, 1498 and 1502. He was determined to find a direct water route west from Europe to Asia, but he never did. Instead, he stumbled upon the Americas. Though he did not really “discover” the New World—millions of people already lived there—his journeys marked the beginning of centuries of exploration and colonization of North and South America.

Did you know? Christopher Columbus was not the first person to propose that a person could reach Asia by sailing west from Europe. In fact, scholars argue that the idea is almost as old as the idea that the Earth is round. (That is, it dates back to early Rome.)

Columbus wanted fame and fortune. Very Trump-esque indeed. King Ferdinand and Queen Isabella wanted the same, along with the opportunity to export Catholicism to lands across the globe. (Columbus, a devout Catholic, was equally enthusiastic about this possibility.)

Columbus’s contract with the Spanish rulers promised that he could keep 10 percent of whatever riches he found, along with a noble title and the governorship of any lands he should encounter. So a religious nut and profiteer. Sounds like America’s evangelical right-wing Christians to me.

For months, Columbus sailed from island to island in what we now know as the Caribbean, looking for the “pearls, precious stones, gold, silver, spices, and other objects and merchandise whatsoever” that he had promised to his Spanish patrons, but he did not find much. In January 1493, leaving several dozen men behind in a makeshift settlement on Hispaniola (present-day Haiti and the Dominican Republic), he left for Spain.
The settlement was called Isabella. When he returned on his 2nd voyage, all the men were gone, dead.

Anyways, Columbus kept a detailed diary during his first voyage. Christopher Columbus’s journal was written between August 3, 1492, and November 6, 1492, and mentions everything from the wildlife he encountered, like dolphins and birds, to the weather to the moods of his crew. More troublingly, it also recorded his initial impressions of the local people and his argument for why they should be enslaved.

“They … brought us parrots and balls of cotton and spears and many other things, which they exchanged for the glass beads and hawks’ bells,” he wrote. “They willingly traded everything they owned … They were well-built, with good bodies and handsome features …They do not bear arms, and do not know them, for I showed them a sword, they took it by the edge and cut themselves out of ignorance. They have no iron …They would make fine servants … With fifty men we could subjugate them all and make them do whatever we want.”

Columbus gifted the journal to Isabella upon his return.

He was basically a slave creator, a slave master, a pro-slavery conqueror. Trump? Yes, I think Trump would approve. Trump is clearly a white supremacist and Aryan believer. His support for white supremacy is well documented and noted. So he would love Christopher Columbus; would probably say there are great people on both sides and award Mr. Columbus with a lovely supportive tweet.

Columbus was such a horrible person that when he was made Governor of Santo Domingo (Dominican Republic) by the King and Queen, he not only murdered the indigenous people who did NOT abide by his directives, he did the same for his own peoples. They were so pissed that they put his sorry nutjob ass in jail. Yep, they jailed him. Eventually, he was sent back to Spain. The King and Queen eventually forgave Columbus and awarded him a 4th and final voyage to which he completely failed.

During the voyage, a hurricane was on the horizon.  He asked the Governor of Santo Domingo for help so he can land and be safe but was told no. Imagine, he was so hated that they decided to let him die in a hurricane. Hated? Very Trump-like. There are millions of Americans and people around the world who would NEVER lift a finger for Donald Trump. If he was dying on the street, they would probably kick him too. Sounds more and more like Trump/Columbus would be a great ticket for the Trump Party.

Columbus eventually survived the hurricane stranded on what is now Jamaica. He was saved a year later after a heroic young shipmate took a lifeboat to get help. But it took over 1 year.

When Columbus eventually went back to Spain, his voyages were forgotten. He was persona non-grata. In fact, for over 300 years his name was nowhere. This is why America is NOT named Columbus. Instead, it’s named after Italian explorer Amerigo Vespucci. Columbus’ name was garbage! Sounds more and more like Trump eh?

The myth of Columbus was resurrected in the 18th century. In fact, The American Revolution created Columbus most of us over the age of 30 learned in grade school. Prior to the late 18th century, he was a historical footnote with no connection to the 13 colonies. An Italian, he sailed under a Spanish flag and landed in no part of the modern-day mainland United States. Yet when the need to develop a national history with no discernible connection to Britain arose during the Revolution, early Americans seized upon him. He was a blank slate on whom post-Revolution Americans could project the virtues they wanted to see in their new nation. Then, as now, the process of writing Columbus was one of defining what it means to be American.

In 1775 Phillis Wheatley, a 14-year-old free African-American girl, wrote a poem to George Washington that so moved the general that he distributed it widely. In it “Columbia” was used as an allegorical representation of the American nation, no doubt a riff on the female figure of Britannia. Though written examples of “Columbia” as old as 1761 exist, young Wheatley’s correspondence with the most popular man in the colonies made it, in today’s parlance, go viral.

Soon Columbia and Columbus were appearing in songs, poems, and essays in newspapers around the colonies. Historian Claudia Bushman cataloged nearly 100 of the surviving odes, most of which are awful. Columbus went from a minor figure in the history of European exploration to an American hero almost overnight.

Why? Even then, people knew that Europeans, including Vikings and Portuguese fishing fleets, had visited or sighted North America before Columbus. And other explorers of Columbus’s era have better claims to “discovery” of the land that we now call the United States. But the politics of the Revolution disqualified the other contenders. Henry Hudson was British. Giovanni Caboto (anglicized as “John Cabot”) sailed for Britain. Juan Ponce de Leon was already in use as a hero in Spain. Giovanni da Verrazzano met an end unbefitting any proper national hero, having been eaten by Carib Indians in 1526.

Columbus had flaws as well. Until his death, he publicly insisted that he had in fact landed in East Asia as he originally intended. He was neither an especially talented mariner nor a success at founding a colony in the New World. Other than to allow him to begin bouncing around the Caribbean doing capricious and cruel things to its inhabitants, his famous voyage accomplished little.

Yet almost nothing was known about Columbus in the American colonies at the dawn of the Revolution, and this worked in his favor. The few written records of his voyages, including a biography by his son Ferdinand and a 16th-century history by Bartolome de Las Casas, were unavailable in the New World and were not translated into English until much later. The only detailed history of Columbus and his voyages widely available in colonial libraries was written by a Scotsman, William Robertson, in 1777. The author took a racist, ethnocentric tone, depicting Columbus as an explorer of noble intent bringing civilization to the savages. Importantly, Robertson also historicized Columbus as a man stifled by the rigid ways of the Old World and yearning to set his own course. The metaphor was not subtle, and revolutionary America embraced it.

Columbus-mania swept the nation beginning with the war, because he became, with the help of Robertson’s history and the flood of epic poems and odes to him, a symbol for the go-it-alone, trailblazing spirit of the American people. Adopting “Columbia” as an informal name for the budding nation implied that, like Columbus, the colonies were shedding the yoke of the Old World. Historical accuracy was irrelevant.

Towns and streets beyond counting, including state capitals in South Carolina (1786) and Ohio (1812), were named for him. In 1784, King’s College in New York City restyled itself Columbia University. Many publications—Columbian Magazine (1786), Columbian Museum (1791), the Columbian Register, the Columbian Weekly Register—appropriated his name. The political organization that eventually became the powerful Tammany Hall political machine in New York was founded in 1786 as the Columbian Order. In 1791, the Territory (later District) of Columbia was established as the national capital. A year later, Robert Gray, sailing the Columbia, scouted the Pacific Northwest, christened the Columbia River, and named the entire region Columbia (which survives north of the border today as British Columbia). And in 1798, Joseph Hopkinson wrote the original national anthem, “Hail Columbia.”

So here we are with Columbus; a myth created to justify our brutal profiteering settling of North America. What would Donald Trump say about Columbus? Would Columbus support a man like Trump? Given all the details above about murder, lying, religious nutjobs, and profiteering, I would say they would absolutely love one another. I think Columbus was be doubled honored and given a wing at the White House.