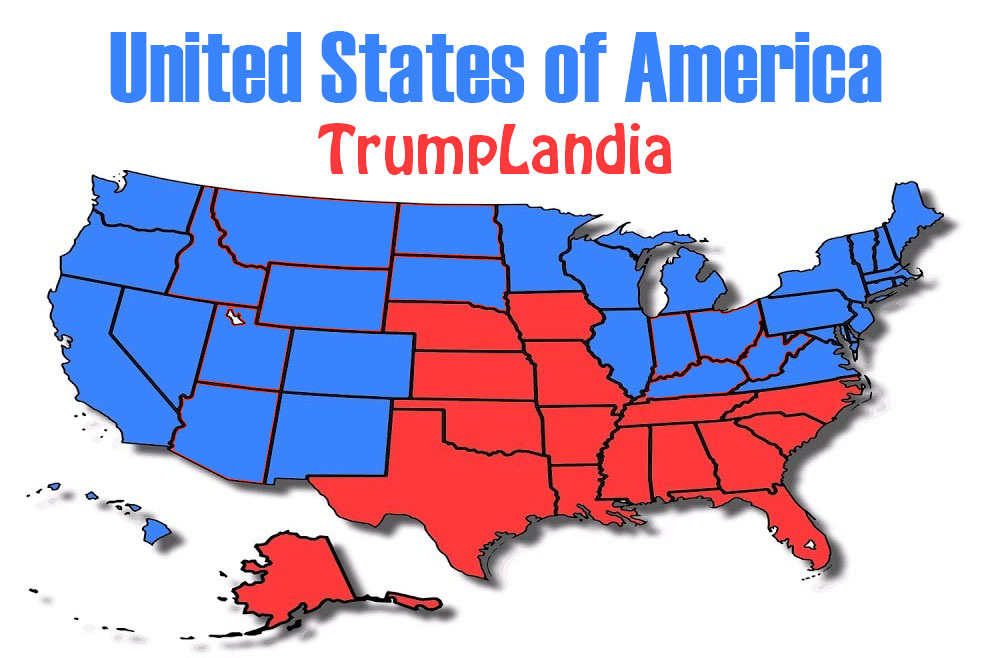 Should the United States of America Break-up into Two Countries?

Should USA Breakup?  Given the current state of affairs, it is a legitimate question.

Divorce happens when values are unable to reconcile.

India broke up because Muslim Indians could NOT reconcile with their brothers of other religions. So Pakistan was created in 1947.

Is it better now? Many say NO! Some say Yes! Hum? Well, in that case, millions did die in the transition so it was NOT so peaceful. Gandhi was against it but Jinnah pushed and a new religious-based country was born.

See CNN’s Faith, fury and fear: The story behind one of history’s greatest mass migrations

In the USA, it can break up between Trumplandia and the new United States. Those who follow Trump can live in his world and the rest can follow the United States as created by its founders.

If the USA can break up relatively peacefully and Trumpers just do NOT want to be part of the United States of America, then I am for it.  However, if any forces want a full out civil war where millions die, I am certainly NOT for such a terrible start to a better world.

Obviously, this was tried before in 1861.  It did NOT go so well.  About 620,000 human beings were killed in battle with families being destroyed for generations.  If you are unaware of the terrible consequences of The Civil War in the United States of America (1861-1865), well, then this article is actually not for you.  Seriously, don’t even bother thinking about this issue if you are NOT well-versed in the history of civil war in the USA.  Breakup is not a flippant thing you do over pancakes.  So just Google it and learn much more first.

Now, as you can see from the map above, break up is NOT an easy thing.  Borders create huge problems.  In peaceful times, not a big deal.  But if either one of the countries becomes hostile, then it creates a huge problem.  But negotiating which states secede to Trumplandia and how a peaceful migration of people can be accomplished can be discussed later.  Right now, the question is “Should the USA break up into two countries?”.

Anyway, a break-up is something to consider as Trump supporters continue to dig into their trenches for Trump using excuses like “election fraud” when they do NOT get their way.

Or is it better for Trump supporters to respect the US law, and when they don’t get their way, just be part of the democracy by peacefully advocating for the issues they care about without getting butt hurt when democracy just does NOT go their way?

In other words, calm the heck down and chill the heck out already because, in this Republic, democracy, sometimes goes your way, and sometimes it does not. That’s how it works for responsible adults who accept being part of a democracy. Trump supporters need to decide.

I, for one, agree with President Elect-Biden, we can work this out together.  But first, you gotta drop this “when we win, it’s cool” and “when we lose it’s a fraud”.  That’s just not cool at all.  So stop bitching and be part of the United States of America or not! Make a decision!  And let’s roll with it.

The latest song from Johnny Punish