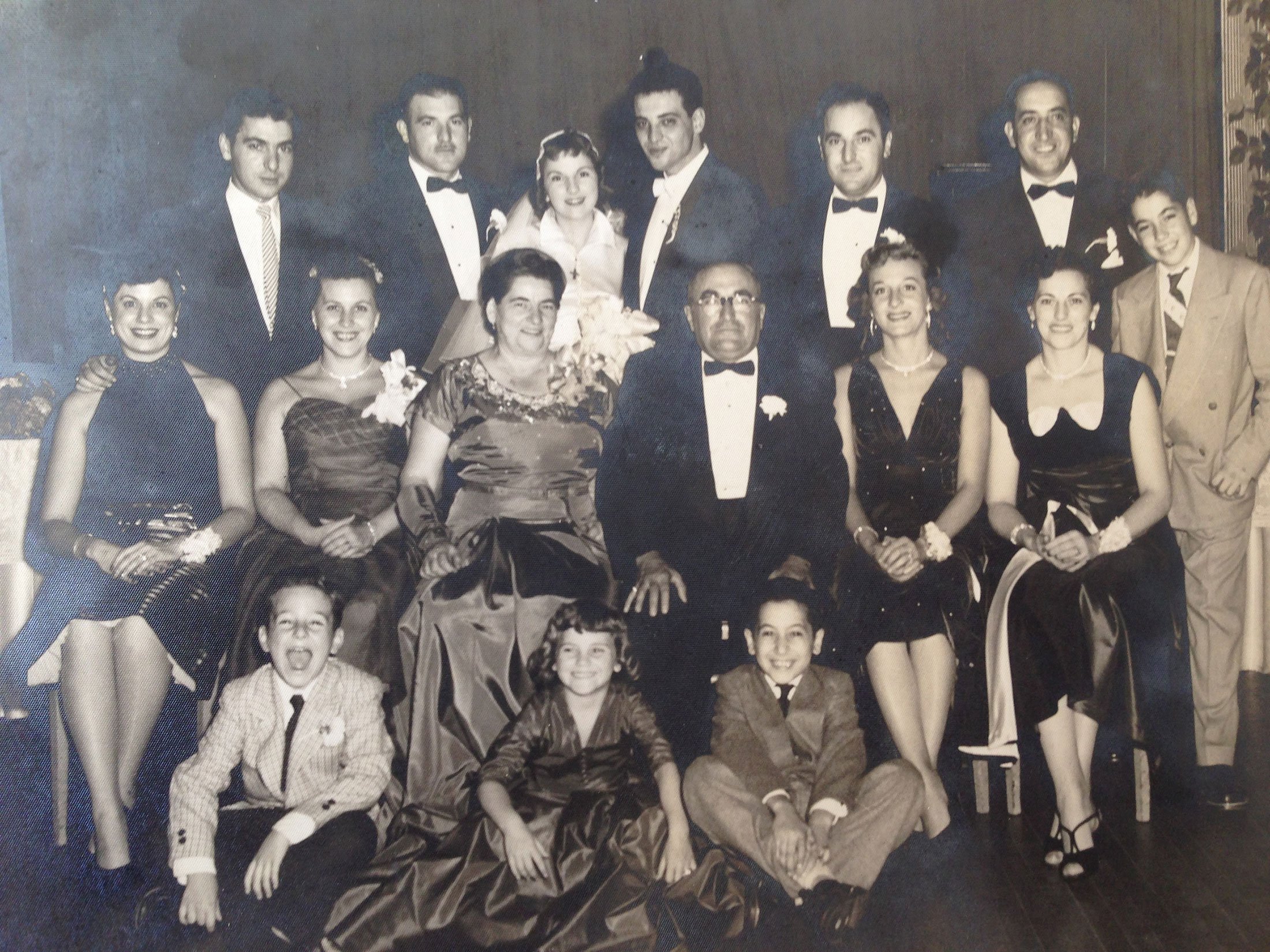 ABOVE PHOTO:  In this early 1950s family picture, Alfonso “BIG AL” Bivona, my grandpa, is at the top right.  Just below him is my father, Charles Alphonse Bivona (b. 1941-d. 2009).  To the left of my dad is his mom, my grandma, Frances Magnetti, who passed at 102 in 2019.   In the center are Frances’s parents, my great granda Theresa Negri and my great-grandpa Anthony Magnetti both from Naples/Avellino in Italy. (photo courtesy of cousin Ron Magnetti of Florida)

So I am Charles Bivona Jr, aka “Johnny Punish”, born in Bronx, NY in 1963.   Recently, my grandkids were asking me where we came from.  So yeah, good question.  Where did we come from?  So I went to work to find where our last name “Bivona” originated and how far back can I trace it?  Well, here’s what I found;

The oldest ancestor with the name “Bivona” that I can find is my 4th great grandfather CIRO BIVONA.  CIRO was born in Marineo, Sicily in 1803. He had 3 sons and 1 daughter with his wife Catarina Fasiano. CIRO passed in 1868.

Yes, the name Alfonso and Carmelo keep getting repeated over the centuries.   Now I cannot find anything BIVONA older than 1803 but I am going to Sicily soon to find out more.  I can actually trace my heritage to Sicily 1745 and Francesco Di Trapani, my 6th great grandfather also from Marineo.  But he came into the tree from a female side via Calderone and Paladino families.  But Bivona?  Well, it must be older so it’s time to find out more.  But I need to go there to dig in.

COMING TO AMERICA FROM SICILY

So how did we get to America?

Well, Alfonso Bivona (b. 1860 in Marineo) with his wife, my 2nd great-grandma, Maria Consetta Giuseppa Calderone (b. 21 Oct 1856 Termini Imerese just East of Palermo in Sicily and their family including their son Carmelo Bivona (b. 1887) were the first Bivona’s to come to America around the turn of the century.

They arrived on ELLIS ISLAND in New York on APRIL 25, 1900.  They were the first Bivona’s to come to America

MILLIONS of Southern Italians and Sicilians came to America between 1880 and 1920. Our family was one of the millions.

Carmelo “Charlie/Charles” Bivona, my great grandfather, had 10 children with his wife Vita Niota, who was also from Sicily.   When he came to America his anglicized name became “Charles” or “Charlie”.   He was a jewelry engraver.

Their son, Alfonso “Big Al” Bivona was born in 1917.  He is my grandfather.  Big Al married Frances Magnetti, who lived across the street on Fish Avenue in the Bronx.  Together, they had 3 children; Charles Alphonse, Ernesto “Ernie” and Richard Anthony.  Big Al passed away in 1967 when I was about 3.5 years old.

THE BIVONA’S IN NEW YORK CITY

Below is the apartment building where The Bivona Family lived around 1910 to the early 1930’s.  My great grandfather Carmelo, great grandmother Vita Niotta and all their kids; Rosa, Joseph, Salvatore, Mario, Maria, and my grandfather Alfonso lived there.  It’s NOT clear if Alfonso and Maria Concetta also lived there.  But knowing La Famiglia, it’s very possible they all lived in the same building.

Carmelo (Charles, Charlie) was a Jewelry Engraver.  His youngest son, Alfonso, my grandpa, grew up to become a home builder. Bivona Street in the Bronx is named after Big Al or Alfonse as they called him.  He built the homes on that street.  My father Charles Alfonse Bivona (b. Nov. 2, 1941) was basically a free-lance salesman most of his life.  He is named after the American name given to Carmelo.  So this is where I got my name from.  And so, I also named my son, Charles.  We all are named after CARMELO “Charles” BIVONA from Marineo, Sicily who is named after the original Carmelo Bivona born in Marineo 1825.

The Bivona family is clearly Sicilian.  Most come from a little town 12 miles south of Palermo called Marineo.  Marineo has about 7,500 in population today.  At its peak, it may have had just 10,000.  So this is small agri-town.   The oldest ancestor found who was “Bivona” was born in 1803.   In the Kingdom of Sicily, it was common for generations to stay put so there could be more, much more.   I will continue the search and report back.