SATURNIA: My Mom Emigrated to USA on this Epic Italian Ship, one of it’s Last Voyages

My mother MARCELLE JEANETTE. TAWIL (TAOUIL) came to the USA by ship on Nov. 28, 1960
The name of this Italian ship was SATURNIA.  This is the moment my mother arrived in America.  An epic moment in family history that changed everything!

Here’s the story of her voyage to America.

During the war in 1948 ( Al-Nakba), my mom and family fled from their home in Haifa, Palestine to Beirut Lebanon.  On the way to Beirut, Robert Tawil was born in Tyre, just over the border.  Later his name was changed to JOSEPH in honor of a fallen soccer hero in the family that was named Joseph; at least that is the story I heard.   Anyways, once in Beirut, they lived from 1948 to 1960.  My mom loved Beirut.  She talked about it often.

But, in these times, the land of opportunity was the USA; the land of Marilyn Monroe and dreams.  So they made their way to come to America. But how?

Well, my grandmother, her mother Helene Abboud carried a Brasilian passport.  That made it easier to travel to America.  Palestinians were NOT exactly on the “let them in” list.  So how can a Palestinian carry such a document?  Well, in the early 1900s, Palestinians were recruited to work in the mines in Sao Paolo Brasil.  Her mom and dad went there to work. And my grandmother weas born there.  Yes, she went to elementary school there and actually spoke Portuguese.  She was always very proud to remember the language she spoke in her youth.

Anyways, the family used the advantage of having a family leader from Brasil to get into the USA.  But there were other challenges too.

First, Edward, the first-born son along with Angele and my mom were too old to be considered minors.  My mom, it was said, was 22 at the time.   And Edward, far older.  Angele was around 24.  But she was already married to George Karma.  So she was NOT going to America, not yet.  Edward was to stay behind for now.  But my mom?  Well, somehow, they “lied” about her age.   It is said she was born on Nov. 27, 1939, which would have made her exactly 21 years old and 1 day on the day of arrival; which would have been too old.

I don’t know the real story and it has not been confirmed, at least not yet.  But it seems that they may have listed my mom born on Nov 27, 1939, thinking they would arrive in America before she was 21 years old and that her real birth date is lost somewhere in Haifa, Palestine.  I am guessing that they may have to do some sweet talking to get her into the USA as a minor. I don’t know. I will keep asking around. But so far, that’s my educated guess.

Anyways, they came from the Port of Beirut in Lebanon and the ship took them to Naples, Italy. Then off to Halifax, Nova Scotia, Canada where they landed on Nov. 26, 1960.  Two days later, on Nov. 28, there were in the Port of New York City to start their American Dream.

Now, you can see on the CREW PASSENGER LIST that she arrived with her father and mother, Elias and Helene, her brothers Hani, Joseph, Ramzi, and sister Naife (Fufu).  Her brother Edward and sisters Adele and Angele stayed behind in Beirut. Edward was too old to travel under my grandmother’s Brazilian passport. Adele and Angele were already married. They came to America later in the 60s. You may also be noticed they are listed as LEBANESE.

Born in Lebanon are the younger kids, Joe, Ramzi and Naife (Fufu). My mother was born in Palestine along with Hani and her father Elias. Her mother was born in Sao Paulo Brasil. Her family was there to work in the mines. But, they are also Palestinian. 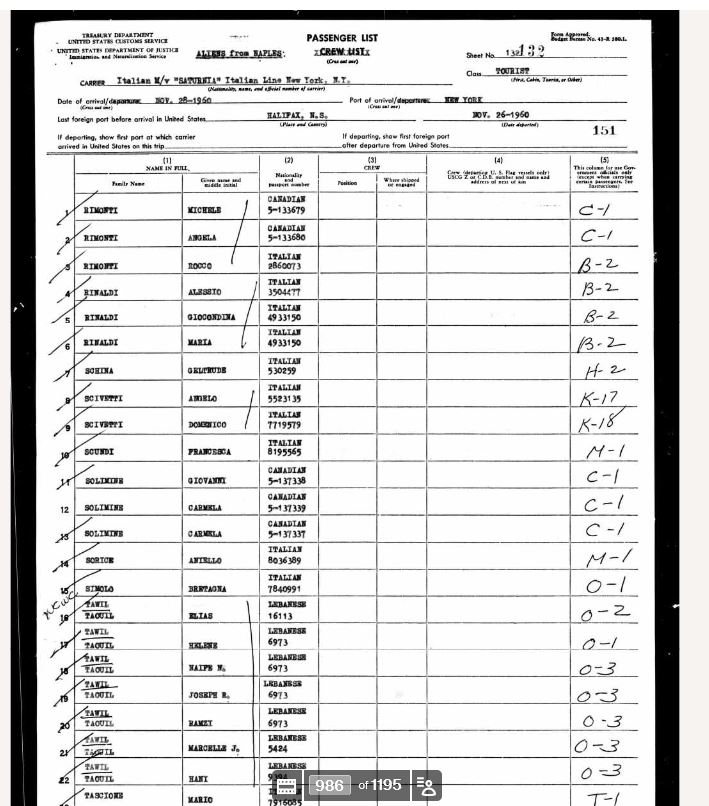