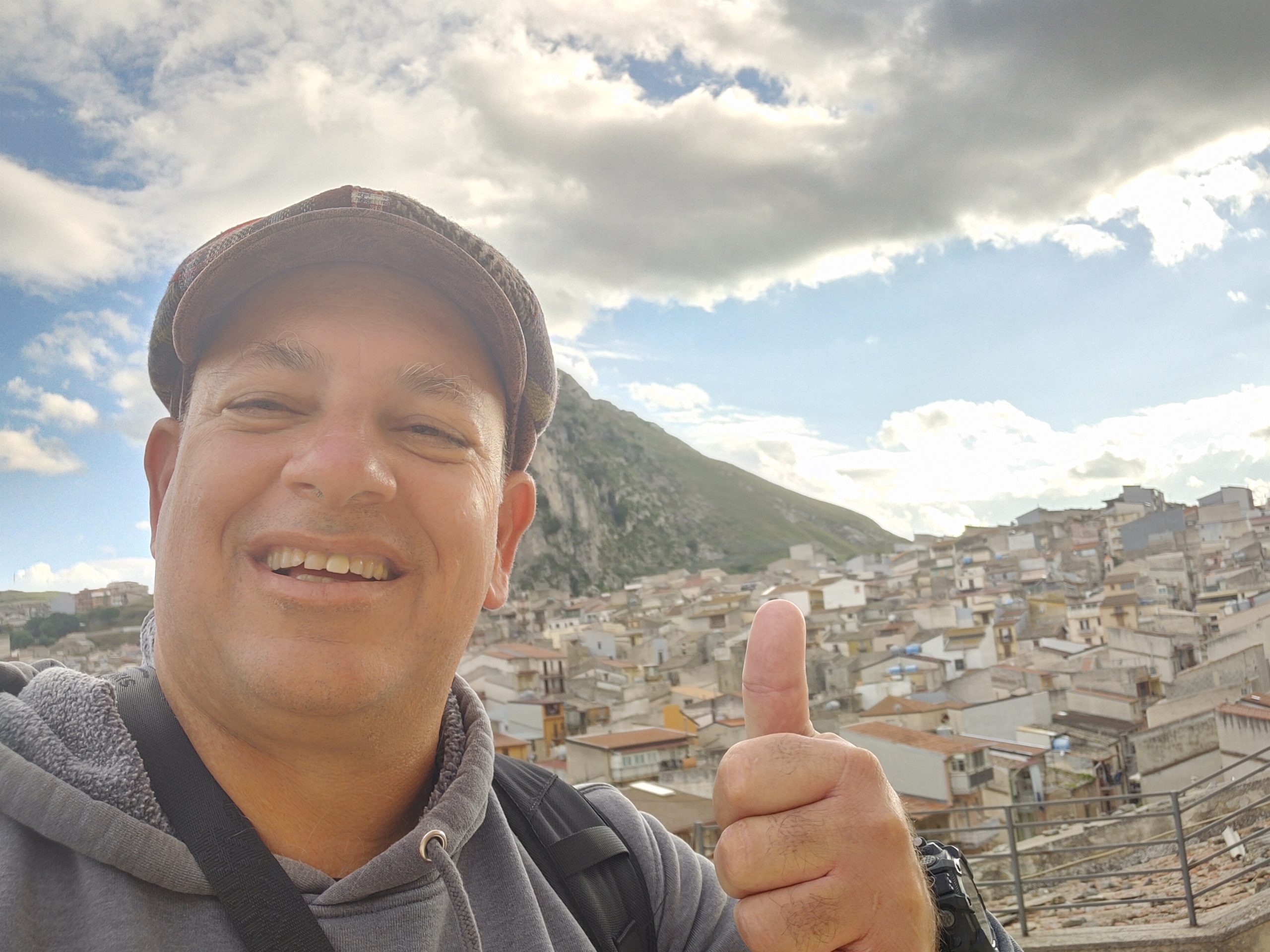 The BIVONA WayBack Machine: Johnny Punish Digs His Roots All The Way Back to Sicily 1753

So digging into my ancestry, the farthest I can go back, so far, is 1753 in Sicily.

That’s when my 5th great grandfather, Giacomo Fassino, was born.  Margherita Barettini, his wife and my 5th great-grandmother was born in 1759.  They lived and raised their kids in Marineo, Sicily.  This ancestry is on my father’s side.  The family may go back even further.  In fact, it probably does because Marineo is an ancient town that goes back and back and back!

Now what I do know is that our family was in Marineo until 1893.  That’s when Alfonso Bivona and his wife Maria Concetta Guispeppa Calderone decided to move to America.  So why did they leave?  What happened?

Well, when Italy became a country in the 1860s (Unification), the leaders, decided to focus on the North of Italy and compete in the emerging industrial revolutions of the time.  Modern industry got priority.  The north was viable.  But in the South of Italy, which was mostly agrarian and offered nothing economically viable for the new state, it was virtually ignored.  The people suffered badly.  In fact, they say almost 90% of Americans who claim of Italian descent came from the South of Italy, precisely between 1860 and 1920.  Millions ran away from poverty.  I can only assume that my great grandfather and mother emigrated in 1893 for the same reason. 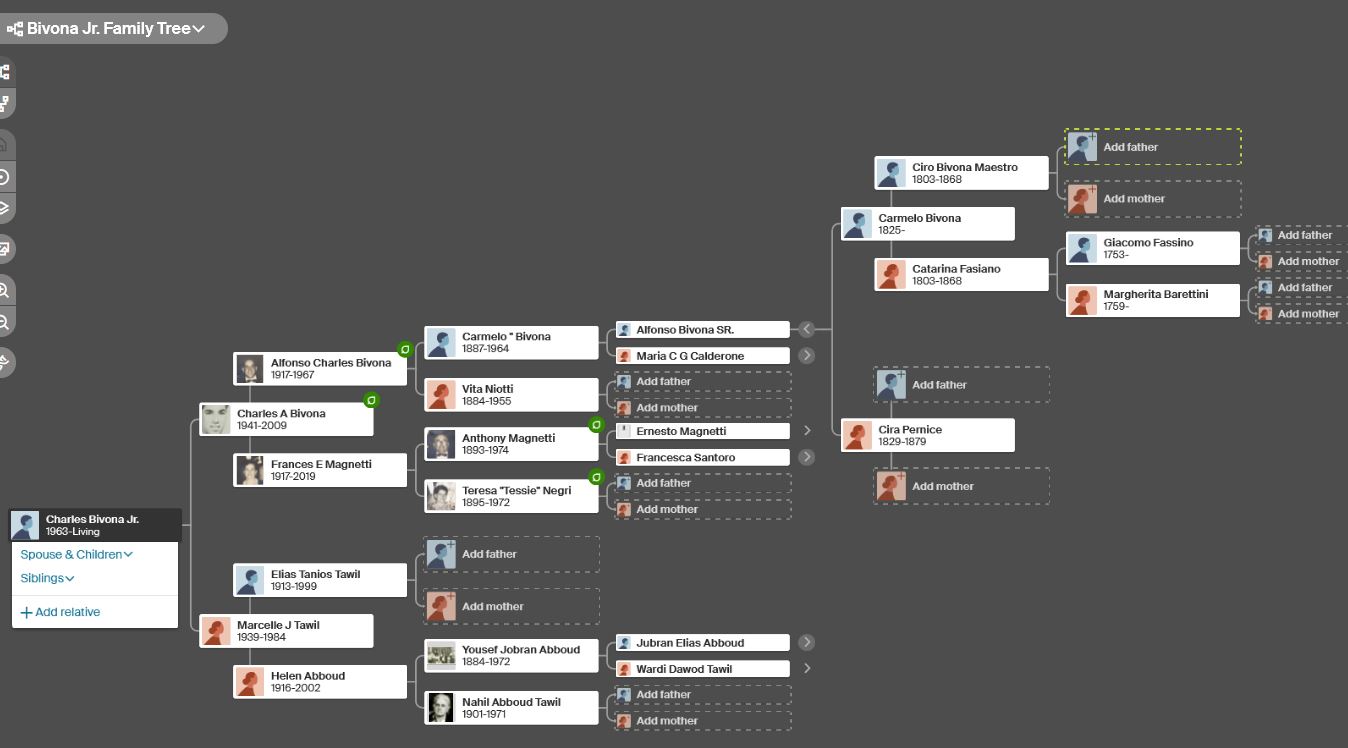 Now with my DNA, I am Levant/Middle East 53%, Southern Italy 43%, Greece/Albania 2%, and France 2%.  The latter two most likely come from my Sicilian side as Sicily was known as Magna Grecia in ancient times and Sicily has a ton of Greek history.   As for France, well, the French invaded and controlled Sicily for a while and that could explain the French ancestry.  Of course, the Middle Eastern is from my mother’s side 100%

Now in 1753, when my 5th great grand-father was born, Sicily was under rule by The Kingdom of Sicily.

It was a state that ruled the part of the Italian Peninsula south of the Papal States between 1282 and 1816. It was established by the War of the Sicilian Vespers (1282–1302), when the island of Sicily revolted and was conquered by the Crown of Aragon, becoming a separate kingdom also called the Kingdom of Sicily. In 1816, it reunified with the island of Sicily to form the Kingdom of the Two Sicilies.

The two kingdoms under the House of Bourbon of Spain

In 1734, in the aftermath of the War of the Polish Succession, Naples was reconquered by King Philip V of Spain, a Bourbon, who installed his younger son, Duke Charles of Parma, as King Charles VII of Naples, starting a cadet branch of the house of Bourbon. Adding to his Neapolitan possessions, he became also King of Sicily with the name of Charles V of Sicily the next year after Austria gave up Sicily and her pretensions to Naples in exchange for the Duchy of Parma and the Grand Duchy of Tuscany. This change of hands opened up a period of economic flourishing and social and political reforms, with many public projects and cultural initiatives directly started or inspired by the king. He remained King of Sicily until his accession to the Spanish throne as Charles III of Spain in 1759, the treaties with Austria forbidding a union of the Italian domains with the Crown of Spain

In Marineo Sicily, where my Bivona Family is from, is about 30 km from Palermo in Sicily. It is situated on a hillock surmounted by a big rock, “LA ROCCA”, called by poets “canine tooth of Sicily” or “Polyphemus’s tomb.

Marineo has ancient origins thanks to the presence of the river Eleuterio.

This village, first founded in 1550, has ancient origins thanks to the presence of the river Eleuterio which during the course of history offered fertile ground for many settlements.

In 1549, Nicola di Amari, who held the feud in emphyteusis, gave it to Francesco Beccadelli Bologna. This nobleman received a “licentia populandi” (a license to found a new village), by Emperor Charles the castle, the Cross Church and the Cathedral to be built.

There are lots of attractions to be seen in this charming village, the Castello Beccadelli was built in 1553 and houses the Archaeological Regional Museum of Valle Euterio which displays precious archaeological findings from the Montagnola and the Valley of the Eleuterio. There is also fascinating graves from the Roman period discovered in the district of Sant’Agata. Another significant archaeological site is Makella where there have been lots of findings dating back to the Iron period. Moreover, the Santuario della Madonna della Dayna is a marvellous church that watches over the village from the top of the rock. Built-in 1400 it was restored after World War II. 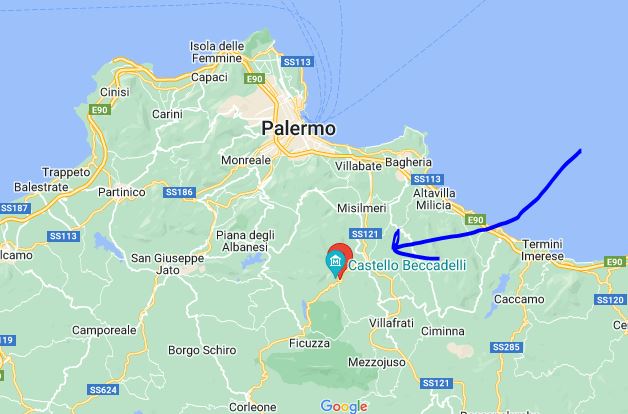 Some rare fragments of pottery found there date back to VIII century B.C.  So we know this area has been inhabited for centuries and is quite ancient.

It was a native center, influenced by Punic and Greek domination. After the Roman conquest, it began declining and in the end disappeared before the Arabian conquest.

Arabian people lived in this place, and then also the Norman people occupied the hill. In the middle of the XIV century, because of the fights between Latin and Catalan armies in Sicily, the site was deserted and the city disappeared forever.

Today, its’ a village of about 7,000 people, friendly, easy going, and lovely to visit.

Walking along the river Eleutero you can find some ruins of ancient mills, Mulinello and Ex Mulino Nuovo, immersed in prominent vegetation, they are considered a significant testimony of the agricultural traditions of this village.

From Marineo it’s also possible to reach the Nature Reserve of Ficuzza where there are lots of natural paths full of Mediterranean vegetation. The Gole dello Stretto path is a fascinating but difficult hike, it goes up the river Eleutero and climbs back along a gorge carved between two hills that offers visitors a beautiful panorama.