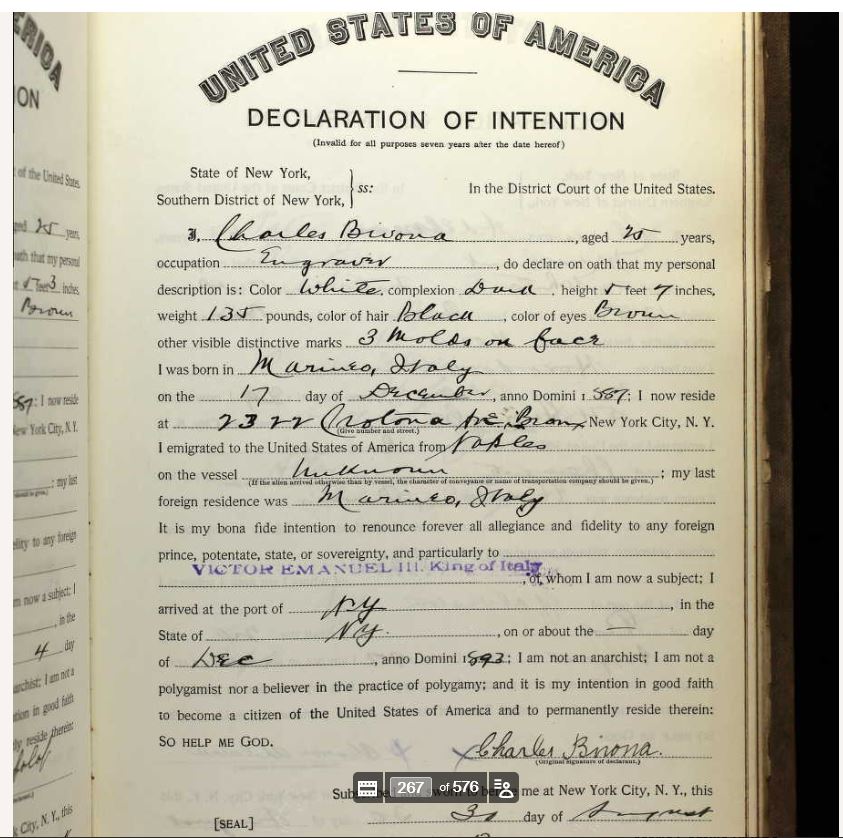 For years, I had NO clue who my great grandfather Bivona was on my Dads side.  Dad said he worked for Time Magazine. But I didn’t even know his name.  Since my dad passed in 2009 and his mom, Frances passed at 102 a few years ago, I had no one around that I could ask.  So, I went to Ancestry.com and, after extensive research, I found some stuff.  Here it is;

Once in the USA, he took the American-sounding name “Charles”.  Most called him “Charlie”.  He came to the USA in 1893 aboard a ship that departed from Naples, Italy in Dec. 1893.  He was just 6 years old and traveled with his parents, my 2nd great grandparents Alfonso Bivona and Maria Concetta Guiseppa Calderone.

I was able to get a copy of the DECLARATION TO WORK he made with the USA in 1913.

It had the name of the ship he arrived on but it was not clear.  I need to investigate more.

In 1913, he was 25 years old and working as an “engraver”.   Later I found out from his World War I registration card that he was a “Photo Engraver”

He passed in 1964.  I was just born.  So I don’t remember anything about him and his wife.   But he must have met me because I was born in The Bronx.   So that’s good to think about!

I don’t yet have any pictures of him. But there must be somewhere!  I will keep searching.

He married Vita Nitta (Niota).  That’s all the information I have on her.  I will keep searching.

According to my great grandfather’s World War, I Draft Registration that he signed on June 5, 1917, he was a “photo engraver”.  It lists his Employer and where but I cannot seem to make it out.  I am going to guess “Chermeal Engravers”. He clearly claims YES to the exemption from the draft but gives no reason why except a “554” which I have no clue what that means.  Also, on this form, he claims “brown” hair and not the “black” that he did on the 1913 Naturalization form.

Notice the BOTTOM LEFT CORNER where it says “If this person is of African descent, tear off this corner”.  I suspect the government wanted to clearly identify the “colored” people so they can separate them into a different “colored only” regiment.