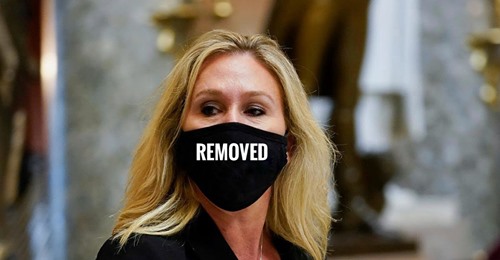 This past week, the Democrat majority US House of Representatives voted to oust White Supremacist Conspiracy Theory Trump Proxy Representative Marjorie Taylor Greene from all committees.  The GOP party members overwhelmingly voted to keep her on, even after it was revealed that she was a Parkland High School Shooting Denier and called for the murder of the House Speaker Nancy Pelosi.  And many Republicans in the U.S. Senate stood quietly.  OK, so what does this mean?

Well, it clearly means we have a new political party arising from the dead carcass of what was once known as the Republican Party.   So without further adieu, ladies and gentlemen, please give a big round of disapproval applause for THE NEW Q-PARTY of AMERICA; a party living in a failed past.

First, so shameful that the new Q PARTY, formerly the GOP, has decided to embrace Conspiracy Theories, White Supremacy and violence against those with whom they don’t agree. But if this who they want to be then so be it.

I strongly contend that the majority of Americans really don’t want these degenerate values to be their foundational principles.  So many in the former Republican Party are appalled, turned off.  Not every Trump supporter was a violent conspiracy theorist. They just wanted some of his policies and so feared the Democrats they voted for him. But, it is true that so many Trump supporters are white supremacists and embrace all the bullshit because they live in fear of the future. So that is also true. So what is going on and why is this happening?   And what are the consequences?

You know in 2020, Domestic Terrorist Donald Trump lost the popular vote by 7 million. In 2024, the Q Party candidate may lose by as much as 30 million as it appeals to an ever-shrinking segment of society that has NO future and lives in a white supremacy past that no longer exists.

I have said this before over and over. White Supremacy is a BAD INVESTMENT. It has no future. Terrorist Trump lied to his flock giving them the impression he could bring White Supremacy back to the front of the line. But he lied. He did so because he rightly believed he could exploit their fears. And he did! But the truth is, no one can stop the death of white supremacy! Period!

The reason is DEMOGRAPHICS and EVOLUTION.

Neither one of these ever-moving forces cares what Terrorist Trump or anyone else thinks. They move without anyone’s permission.  And in a globalized world, the move is clear;

We are all becoming more beige every day.

No country is immune now.  Cultures are changing faster than ever before. The COVID plague has slowed this down but it’s only a temporary slowdown on a trajectory that is moving with great unstoppable inertia. This is the truth and leaders should level with their constituents instead of filling them with fears they cannot assuage. Truth is a winning strategy that has a future. Smart leaders ought to embrace it and challenge the people to get off their asses and stop whining about the past. It’s gone thank goodness and it will NEVER return. The future moves forward!